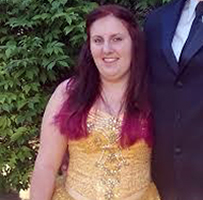 I want to share my story so that other people know they aren’t alone, like I felt like I was. I know the struggle of being in junior high and high school, having epilepsy, and not being able to take birth control because your doctors aren’t sure if they are compatible with your epilepsy medication. Here is my story.

At the same time that I was struggling with epilepsy in the seventh, eighth, and ninth grades, I made friends with the wrong people and got in a bad crowd. I started drinking and smoking marijuana. I would sneak out at night, meet up with people, and go to parties. At school, I made friends with the “players” and had sex with them and so did my “friends.” I wasn’t taking care of myself. I wasn’t being safe. And, on top of that, I wasn’t taking my medication right. I was doing it all because I just wanted to fit in, but what I was really doing was having seizures left and right and getting angry at myself and my family.

I was getting better and getting my epilepsy under control, but life kept throwing me curve balls. That same year that I was trying to do better for myself, I saw my friend die from cancer. I couldn’t handle the stress and seeing him in the state he was in. And, I had a very bad seizure and hurt my back. I don’t know how I got through it, but I did.

I graduated high school and I started college. I said goodbye to my old “friends.” I realized that I deserve to be surrounded by people who support me and who make healthy decisions. And I met my boyfriend. He knows how to be calm if I have a seizure. He knows my history. He accepts me for who I am now. And, he supports me.