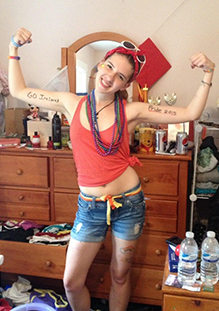 Epilepsy stigma has been around as long as the condition itself. I’ve even found examples of epilepsy stigma in the Bible, where people with epilepsy are described as being possessed by demons, unclean, or sinners. This thinking about epilepsy lasted up until the late 18th century.

We are far from that time now. We know that epilepsy is a health condition, not a sign of being possessed. We also know that antiepileptic drugs are better treatments for epilepsy than exorcisms! But stigma is still around. And for me, the stigma surrounding epilepsy is worse than the epilepsy itself.

The stigma of epilepsy mostly affects my personal and social life. I feel like people always see me as a liability and they exclude me from things I want to do. In high school, I wasn’t popular or unpopular. I think if it weren’t for my epilepsy, I could’ve been more popular. I had the mindset of a party girl, and wanted to go to parties and check out the nightlife in the city. But, I rarely got the invitations because no one wanted extra liability at a party. At the same time, everyone knew me because I had my first seizure at school. After that, people saw my disability more than they saw me.

The past few years since my diagnosis, my friends and family have been trying to keep me from things I am capable of doing. They think it is too much of a risk for me to do things like go swimming in the ocean, be alone for extended periods of time, or exercise alone. A lot of my friends won’t travel far distances with me, and discourage me from things I want to do because they are worried I could have a seizure. People who aren’t close to me never want to be near me at parties in case they have to be the one to administer first aid if God forbid something happened, leaving my few friends with the burden of watching me. Some people I used to call my friends even found new and healthy friends- leaving me with fewer and fewer friends.

I have fears too, and there are a lot of things I’m too hesitant to do. Granted, I have my days where I throw all caution to the wind and do it anyway, but that’s not the status quo.

Stigma shows up differently for each person. This is just my experience with the stigma of epilepsy. I see that over time, epilepsy stigma has become less and less. I hope we can keep that up and get rid of epilepsy stigma. We are the generation who can change the world, and ending stigma is a huge part of doing so!